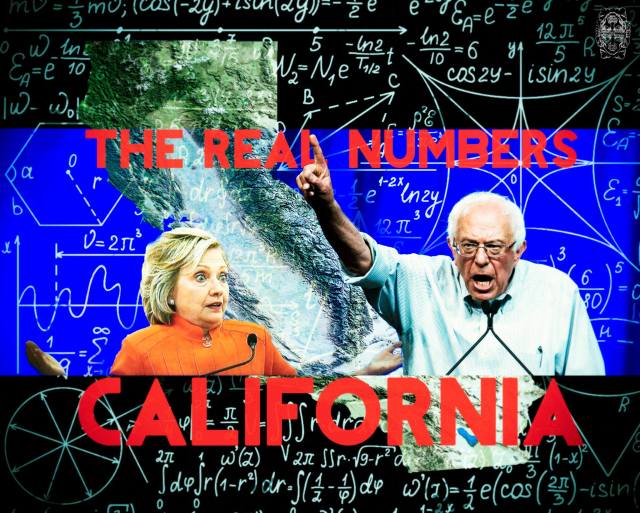 The Golden State: According to Math

Warmest greetings, my friends! Today, I’m going to drop some very important numbers to prepare you for…

The Battle of California!

Of course, you all know — as well as I — that the California primary has the power to make or break each of the candidates for democratic nominee.

With a stunning 475 pledged delegates at stake, the fight for the Golden State will bea battle for the heart of our democracy — its results shall blare & resound like roaring thunder in the teleprompters of every TV station in the nation and they shall flash with the brightness of ten-thousand suns on the screens of millions of Facebook & Twitter feeds.

Verily, on that day, some shall rejoice, while others shall cast their faces down & gnash their teeth!

So, Does Bernie Sanders Stand a Chance?

Yes. Well, that does it for this section. Let’s move on!

Our numbers are looking better and better by the day, my friends! Whatever the media says, they can’t argue with math — and, because I know that you all are very busy, I’ve gathered all the latest numbers for you! They’re inside this article — come, follow me!

Yesterday, the 26th, the non-partisan Public Policy Institute released a new pollshowing a mere 2% between Sanders and Clinton and that’s within the poll’s margin of error, which means that they’re essentially tied! The 12-point lead that Clinton held in California at the beginning of 2016 has utterly disappearedand, as I’ve written about in a previous article, this trend seems likely to continue over the next 11 days until the June 7th primaries.

Beside the fact that it’s all suddenly tied-up, another very interesting feature of the new poll is that Clinton’s lead among nonwhite voters appears to have vanished in California!

But don’t start laughing with glee, yet! Read the rest of this article because these are just the first of many reasons to rejoice!

Now, the polls have been spotty (at best!) during this primary cycle — and I believe that Sanders is doing even better than the polls are showing in California. Though I’m certain all the trolls in the comment section will loudly disagree, I think that there’s good evidence that many pollsters are making a mistake by assuming that the age demographics on June 7th will follow the patterns of previous primary seasons.

The trolls can call me names, repeat their slogans, & yell all they want —but numbers are my ally — and a powerful ally they are. Behold!

This all comes after over a million new voters registered between January and April — all together, this comes to about 1.8 million new voters this year! That means that there will be about 18 million registered voters on June 7th and,as of April, about 70% of registered California voters were registered as democrats or no party preference — precisely the two groups who will be voting in the democratic primary. This represents about a 2 million voter increase from 2008, when Clinton & Obama faced off — and it appears that this increase is mostly made of voters between 17-35!

All of these numbers favor us

The tide is turning, my friends — with the State Department’s recent condemnation of Clinton’s dishonest statements about the email scandal, even MSNBC is starting to turn against her, as can be seen in this video — and keep in mind: these are some of Clinton’s most loyal media defenders!

This is our time, Berners!

Clinton’s scandals are finally catching up to her and even the media can’t let her off the hook, anymore! Clinton broke her promise to debate before the June 7th primaries and her campaign is dumping money into TV ads & phonebanking in California — these desperate actions only show how scared they really are.

They are scared of losing California and losing it badly — they know that this is a very real possibility.

Clinton is engaging in a lot of fund-raisers & campaigning in California — we must counter her by DONATING to Bernie Sanders’ campaign!

Clinton is phonebanking in California — let’s phonebank 10x as much! We have massive, popular grassroots support — she does not and that is her greatest weakness.

California is BERNING. Let them know about it.