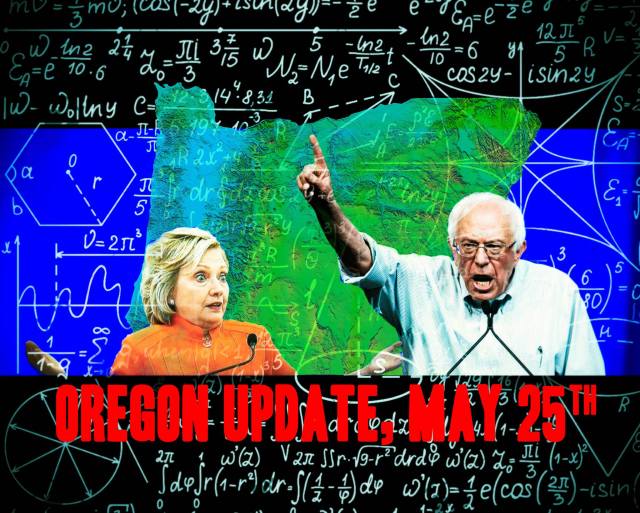 Greetings, my friends! This is just a quick update on the number of votes that the Associated press (still) isn’t reporting from the Oregon democratic primary. If you’re confused about where I’m getting these numbers, I suggest you go back and read the last article that I wrote on the unreported Oregon results.

Since the last article, I’ve collected updated numbers from Multnomah, Clackamas, & Marion counties but, because many counties do not have further updates scheduled until June 1st, I’ve been unable to collect enough information to give an accurate projection for how many more votes will ultimately be added. Nonetheless, I’ve unearthed an additional…

Sanders has 1,583 of them and Clinton has 549! Then, adding them all to my updated total from the previous article…

We arrive at the most-recent count, which is…

Just with these 2,132 new votes from 3 county’s updates (more on the way), we’ve inched another 0.1%. Sanders’ margin today is consistent with my previous calculations for his overall take of the later un-reported ballots and there is good reason to believe that we will continue to gain ground at a similar rate, as the rest of the large counties update their results.

There are still 5 out of the 10 most-populated counties that I haven’t been able to obtain updated results from and many counties will be updating on June 1st. I will post an update at that time but, in the meantime, we must be patient — and focus all of our attention on California.

Several large counties are still estimating that they’ve counted less than 100% of their ballots, including Marion county, where they’ve estimated 95.9% counted.Using the county’s totals (and, sorry, a little bit of algebra)…

I’ll project that, if the county’s totals and estimated percent-reported are correct, there should be (roughly) another 1,501 votes to be counted from Marion County alone and — if the Sand-Man continues to take it at about 68% — the remaining votes from Marion County will push us up over 57% (in addition to any other gains we might get as the counties finalize their results).

This all may seem like small change but every percentage-point and delegate that we can wring from these last contests counts and it will push us that much closer to having the numbers we need at the convention on July 25th.

I will write to you all again, very soon — very shortly, I intend to publish something solid on the numbers in Puerto Rico and on the numbers we’ll be working with onJudgment Day — June 7th.

But before I go: I beg you all, between now and Judgment Day — do not grow complacent! Bernie Sanders needs us to win! We must all continue to donate,phonebank, & share information on social media — this is not the time to sit back and watch! This is the time to gather all of our strength and resources for the final charge to Philadelphia.

Do not underestimate the importance of doing everything that you can do, right now — even if it is as small as donating two or three dollars or sharing this article.

If we want it badly enough, we can win!