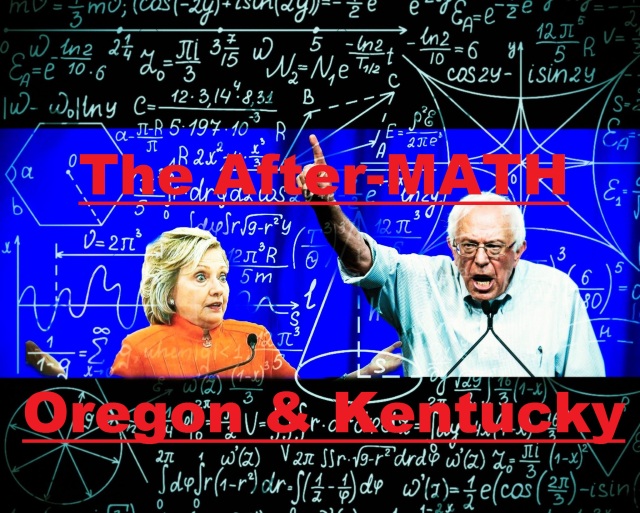 Note: Minor updates will be ongoing, as the last few %s roll in and, possibly, as irregularities are discovered or addressed in the extremely-close KY primary.

Welcome back, my friends! Before we dive into the details of the delegate math, I’d like to extend my sincere gratitude to all of you who assisted me with research, who sent me articles, and who pointed out errors (you know who you are) throughout my ongoing coverage of the disaster in Nevada — please, know that your help was appreciated greatly!

Now, let’s move forward and examine the math from Kentucky* — I shall be updating this article with the math from Oregon shortly (depending on how quickly the results pour in, of course).

*At the time of writing, most sources are reporting that Kentucky is too close to call (with the exception of CNN) and, because of “voting irregularities,” (tired of those, yet?) it is likely that the primary’s final result won’t be called (except, probably, by the fart-heads at CNN) for at least a few days

For all practical purposes, we seem to have tied in Kentucky — but, as is usual with such a close race, I’m sure that there will be recounts, investigations, and adjustments that will unfold in the coming days and weeks. The situation may change — but let’s work with what we know presently. With 99.8% reporting currently, Clinton is reported to have 46.8% and Sanders to have 46.3%.

In order to reach the bare majority of 2,026 pledged delegates, Bernie Sanders will need…

Sanders is going to have to win 66.7% of the remaining vote — but don’t get too attached to that number, yet — the results from Oregon are pouring in and that number is soon to change! Stay tuned for the Oregon math, where the fate of an additional 61 delegates will be decided…

At the time of this writing (about 01:00pm PDT), 55 out of 61 pledged delegates in Oregon have been allocated by the Green Papers and 95.5% of precincts are reporting. Sanders has handily defeated Clinton in Oregon (though, admittedly, not quite as handily as many of us had hoped) with 56.0% to 44.0%, and 32 to 23 delegates. This increases both totals to:

Sanders now needs 530 more pledged delegates to take the lead — and, dividing 530 by 787 (the number of remaining delegates) that means:

Bernie will have to win 67.3% of the remaining contests to win the majority— “an uphill battle,” as the Sand-Man says!

Now, since I’ve built up a reputation that I don’t plan on spoiling anytime soon, I’m going to pictch it to you straight: we must do better than we’ve been doing! In May, out of 229 pledged delegates, Sanders grabbed 125. That’s 54.5% of the delegates because:

Difficult, but not impossible. Remember: they wouldn’t have risked such openly corrupt behavior in Nevada (for a delegate or two) if they weren’t afraid of Sanders closing the gap. Clinton’s match-up polls against Trump look worse every day and her favorability ratings have been — and are — falling steadily. Clinton hasn’t won a single state in May and she knows this. That’s why she is stepping up her campaign in California, right now. The democratic party knows that Clinton is performing dismally among independents and even the number of democrats that wouldn’t vote for her is rising (especially, after Nevada). This is not the time to give in — this is the time to press harder than ever! From now on, anything other than our best performance will not be enough.

But take heart, my friends! What Kentucky and Oregon have taught us is that Clinton is now having trouble breaking even in closed primaries, which used to be where she performed the strongest! On June 4th and 5th, when the Virgin Islands (7 pledged delegates) and Puerto Rico (60) hold their open caucuses (which is where we usually do best), we will have a shot at gaining some needed ground before Judgment Day on June 7th. And don’t forget that California is a semi-open primary.

I assure you — it is not a dream. It is ours if we will only seize it. The future is not some predetermined thing that we are entering against our will — we are creating the future, right NOW.