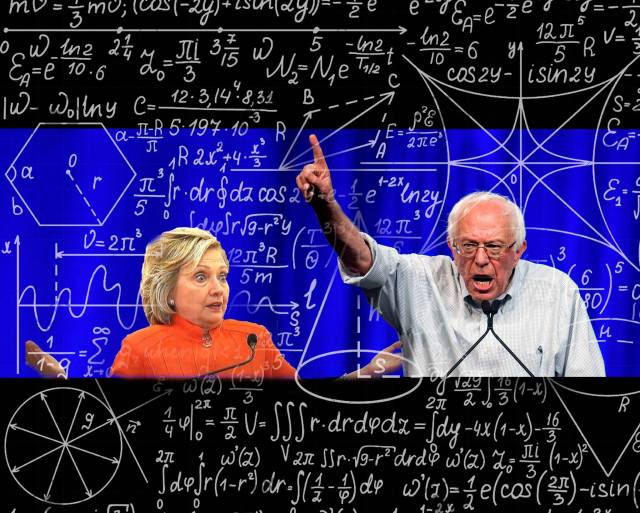 Can Sanders do it? Or is Clinton truly inevitable?

Math vs. Media: Part One

Bernie Sanders has vowed to fight relentlessly for the 2016 Democratic Party’s nomination up to the convention and, despite the apparent consensus of the media’s talking heads that the campaign is a lost cause, he has held fast to his claim that there is a “narrow path to victory.” I am reminded of Galadriel’s ominous words of advice, in the Fellowship of the Ring: The quest stands upon the edge of a knife — stray but a little, and it will fail… ÷

It has even become something of a weekly occurrence for Hillary Clinton and her Wallstreet-backed campaign to imply, insinuate, or flat-out demand that Sanders withdraw his bid for the nomination — they are growing increasingly indignant about the fact that Sanders is trying to win. Which brings us to the heart of the issue — can Bernie Sanders–can we–win the delegates needed for the nomination?

Why Clinton Will Not Secure the Nomination, According to Math

According to the Green Papers, Clinton stands (today, April 28th) with 1,664 pledged delegates, while Sanders has gathered 1,371. The amount of delegates needed to secure the nomination is 2,383 and, if you’ll pardon me for my use of arithmetic, I will now demonstrate why that number is hopelessly out of reach for the Clinton campaign.†

It is no secret that Sanders, a previously invisible independent senator from the tiny state of Vermont, consistently climbs in the polls as he begins to campaign in the weeks before each state has had its primary. You don’t have to take my word for it — check the poll-histories for yourself or read this.

Because Bernie Sanders performs at his absolute best in open primaries and because he consistently rises in the polls, while Clinton consistently falls, it is extremely unlikely that Clinton will perform better than 49 points, let alone win the contest. Let’s do some more math:

Of the 475 delegates available in California on June 7th, lets say Hillary takes 49% of those (even though she will almost certainly take less). That would give her 232.75 delegates, which we’ll round up to an even 234.

Next, let’s add that to her current total of 1,664, bringing her up to 1,897. Now, she needs an additional 486 delegates to reach the magic number of 2,383, right? Let’s find out how many delegates Clinton would have to win in the remaining states (besides California, of course).

Now, how likely does that sound? It’s not likely in Oregon, a fairly progressive state that shares its general attitudes with Washington, a state that Sanders won with about 70% of the vote. It’s not likely in West Virginia, either, where Sanders is currently leading in the polls. Nor is it likely in Indiana where Sanders and Clinton are almost neck-and-neck, which votes on May 3rd. That nomination is feeling a lot further away now, isn’t it?

Okay, okay — maybe you’re thinking, “John, I think you’re being unfair, Clinton could certainly win California.” To which I would reply: I admire your optimism, my friend — and since you’re so optimistic, let’s run those numbers again — but this time, let’s assume that Clinton, for whatever reason, defies the consistent trends that have prevailed over the entire primary season. Let’s say, she jumps up 11% now, winning the California primary with 60% of the vote. So:

So, Clinton will still need to scrape up 434 delegates somewhere other than California, some how. Which means — Hold on, first we have to figure out how much of the remaining delegates she’ll have to win:

Wow! Even if Clinton actually wins California with 60% to Sanders with 40%, she will still have to secure about 80% of the remaining vote! Again, this certainly doesn’t seem likely in Oregon, West Virginia, or Indiana, which means the actual percentage would climb each time she failed to take 80% of a state! Now, are you starting to see why I am saying that Clinton will not be securing the nomination before the convention?

Why Sanders Will Win, According to Math

If you’ve found yourself thinking, “Well, Sanders won’t secure the nomination, either!” You are almost 100% right! Well, 99.6% right, anyway. Because, if we take Sanders’ current delegate total of 1,371, subtract that from the magic 2,383, then divide that by the remaining available delegates, we get 0.996, see:

Therefore, Sanders would have to secure a whopping 99.6% victory in all remaining states to secure the nomination! I think this may be one of the few things that both Berners and Clintonistas could agree on: that that is impossible. But to those of you that are thinking, “John! This is terrible” or “Haha! Take that, Sanders!” I would reply: You are both wrong. Mostly. Let me explain:

“Um… But John…” you may be saying, “Won’t Hillary still be miles ahead of Sanders in votes at the convention?”

To which I would reply: I’m glad you asked, my paid Hillary-supporter friend! Allow me to demonstrate how that will also not be the case, no matter what the media would have you believe. Follow me!

Since neither of them will be securing the 2,383 needed for the nomination, let’s take a look at another number that has been hiding in plain sight for far too long. I’d like you to meet the number, 4,051. That’s the number of total pledged delegates that are available from all 50 states, plus DC, US territories, and the Democrats abroad. As it should be obvious, a majority of these delegates would be 2,026 because:

At the convention, this number is going to matter more than the unattainable 2,383 delegates that no one will have. That being the case, let’s take a look at what Bernie Sanders would have to do to get there. If Sanders won 60% of the remaining contests (and remember how 475 of 1,016 are in California, where Sanders will do well), then the numbers at the convention would look like this:

So, in the scenario where Sanders takes about 60% of the remaining vote, we’re essentially looking at a 49 to 51% vote total at the convention — not so bad, eh? And that’s easily within Sanders’ reach, if we do well in California (which we almost certainly will). Let’s look at what happens if he takes 70% (just like he did last time we went to the West/Left Coast):

Now, does Sanders winning 64.4% sound too far-fetched? Not particularly, especially when we consider his advantages on the Left Coast, in California’s 475 delegate semi-open primary. An uphill climb, though? Certainly. Remember, though: it is all but certain that Clinton will not secure the nomination, while Sanders supporters are going to be pouring into Philadelphia for the convention by the tens of thousands. Even if Bernie fell short by a few points, we’re still essentially looking at a tie. And that’s when all hell is going to break loose.

Things are going to become very interesting if we have a near-tie at the convention to be decided by the super-delegates.

Things are going to become very interesting when they look back at the many states that are still crying out for a re-vote, states fraught with “voting irregularities,” polling station closures, and voter roll purges — all states which Clinton won and all states which so far have not received justice.

Things are going to become very interesting when the DNC and the super-delegates realize that Sanders, unlike the Wallstreet-backed Clinton-Machine, will bring in not only millions of independent voters that were unable to vote in the primaries, but even defecting Republican votes, sealing the GOP’s utter defeat in November.

Things are going to become very interesting when, while they are thinking about all of these things, they are doing so to the earth-shaking, thunderous chants of“Bernie! Bernie! Bernie!” from his tens of thousands of supporters outside, who have time-and-again proven their ability to rally by the tens of thousands — do you think that we won’t do the same at the convention?

And finally, things are going to become very, very interesting when the super-delegates and the DNC are forced to choose, publicly, whether to hand the nomination to Clinton and watch the millions of independents walk away, along with millions of former-democrat Sanders-supporters, basically handing the general election to the neo-fascists Trump or Cruz — or, to hand it to Sanders, a leader who will have the support, not only of the entire Democratic Party, but of millions of Independents, Green Party voters, and — yes, indeed — even Republicans defecting from the extremist GOP. That will be the most interesting part, I think. I’ll see you all in Philadelphia.

P.S. Please feel totally free to reproduce this article, re-post, re-use, re-cycle, or whatever, in whole or in part — credit would be lovely but, ultimately, I don’t really care! Do as ye will! Peace!

EDIT: I’ve written a follow-up article to address some of the comments because I don’t have enough time to respond to them all — thanks for reading! CLICK FOR PART TWO

†I have not counted the so-called “super-delegates” because they do not vote until the convention, which you might not know because of the media’s disgustingly corrupt attempt to warp the public’s perception of the election.